Students and staff flew out to Malaga and then travelled on to Atalaya Park Golf Resort, arriving late afternoon. The first day ended with fun, activity and enjoyment at Aqua-Mijas Water Park, where students and staff had free rein of a deserted park, competing against one another on slides and supporting one another on a difficult water-rapid trail. For a number of the children, this was their first time overseas, away from home.

Day 2 started with netball and football training; students working through the heat but did so with smiles on their faces. The girls finished playing an internal fixture, with some fantastic shooting from Chloe P and Maddison M. The youngest player, Elyse E fully diverged herself into the match with no hesitation against some of our older girls and whilst all of our girls played well, some outstanding performances came from a number of players, notably: Maddison L, Ruby F and Megan R. The remainder of the day was given over to leisure were our students enjoyed some fun walking-on-water activities with plenty of opportunities for developing friendships and independence.

Prior to the match against Inter Marbella, the St Cuthbert’s boys trained intensely in difficult, warm conditions and did so with focus and commitment to one another. They produced a committed and hard-working performance against a technically shrewd opponent. For the first 30 minutes of the game St Cuthbert’s had the better chances of the two teams, and were unlucky to go into half time 3-2 down. Harrison R made a phenomenal penalty save and two follow up saves to deny Inter Marbella increasing their lead further. Adam B and Jack K linked up excellently on the right side of the pitch to create a number of chances, while Nathan B produced an energetic midfield display covering what seemed all of the pitch. As the second half progressed, fitness did start to take its toll as the conditions started to have a major influence on the game. Inter Marbella increased their lead further, adding two well-worked goals in the second half; before a late consolation goal from our boys gave the score line a true reflection of their attitude and effort. The final score line was 5-3 to Inter Marbella with goals for St. Cuthberts scored by captain Kieran S, and two goals from Nathan B. Nathan B was awarded the man of the match for his robust performance in the game.

The final day saw a final dip in the pool and some tennis in the morning, before leaving for an eye-opening trip to Puerto Banus where students were able to see first-hand the wealthy lifestyles of others. Students were in awe and intrigued by the vast range of incredible yachts in the port and staff were pleased to hear the discussions and aspirations of the students.

Throughout the trip, students also participated in a vast range of activities, which promoted teamwork, cooperation, communication and problem solving. From volleyball and swimming to castle-building and organisation tasks. The students fully embraced the Spanish culture and where possible practiced and enhanced the Spanish speaking and listening skills.

Miss Lethbridge, curriculum leader for physical education and health and social care at St Cuthbert’s commented: “Students’ behaviour was exemplary throughout the trip and it was a pleasure to give them this opportunity and help them create fantastic life-long memories. On a number of occasions the public, from hotel visitors to individuals we met complemented our students on their attitudes, manners and general behaviours around each activity, meal times and around the pool and airport areas.”

One of the students Charley H said: It was amazing! It has inspired me to travel the world. I loved spending time together as a group and working as team.” 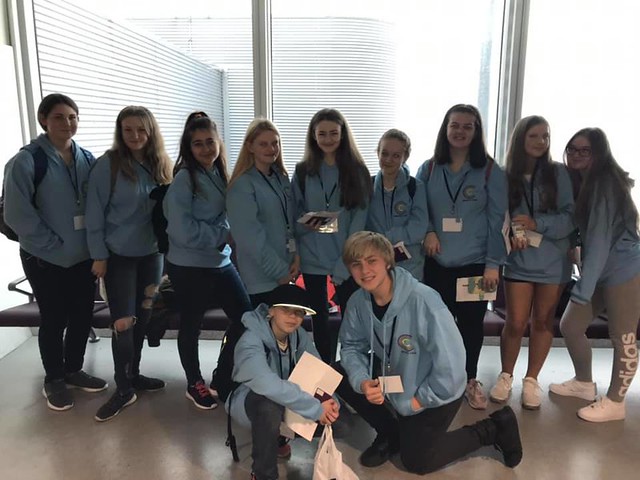