St Cuthbert’s Secondary Modern School was opened by the Most Rev. John Carmel Heenan, D.D., Ph.D., Archbishop of Liverpool, September 29th, 1957.  It was the first Catholic Secondary Modern to be built since the war.

Without the financial assistance of its parishioners and helpers, St Cuthbert’s could never have been founded.  All the parishes concerned – St Vincent’s, St Joseph’s, St Annes’s and St Theresa’s – together agreed to find approximately £40,000 (about £675,000 today). In his preface to the Solemn Blessing and Opening, the Archbishop remarked “The Faithful of St Helens have not been daunted by the size of the debt they have to contract. Long after the money has been paid; St Cuthbert’s school will yield dividends in the well instructed Catholic men and women trained within its walls.” 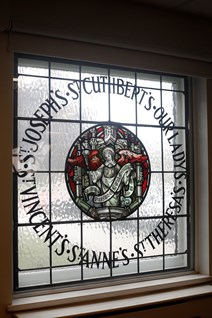 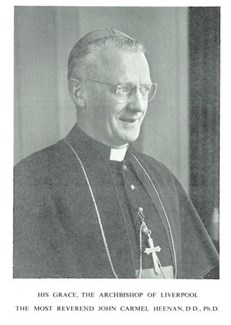 In the same booklet, Rev. Fr. J Harrison C.S. Sp. writes in his history of St Cuthbert“that no work is more acceptable to God than that of educating young girls and boys made in the image of God. Most suitably, therefore, he was chosen as the Patron of this school".

St Cuthbert -The Wonderworker of Britain -was born and bred in the North of England. He lived in the 7th Century and his life was one of almost continuous prayer devoted to the service of God and his neighbour in the northern parts of England. 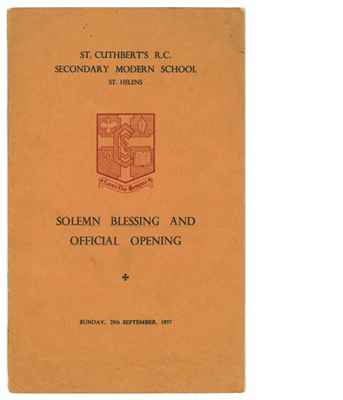 Recognising the challenges faced by the architects and builders the Chairman of the School Governors at the time of the school’s opening commented “…in building a school of the magnitude of St Cuthbert’s on its present site; the difficulties that confronted them is, in part, the measure of their achievements; an eloquent testimonial to their efficient and meticulous planning.” 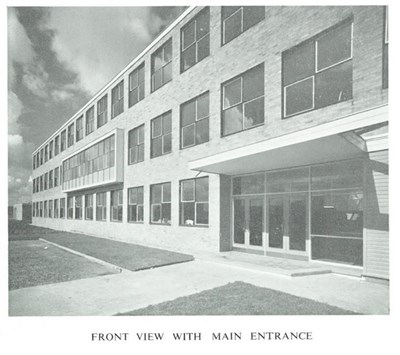 Part of this planning was the decision “to enclose the concrete frame of the building in a mass of rustic brickwork so as to avoid any exposed concrete surfaces becoming discoloured and streaky in this industrial area”. The distinctive main elevation of the school appears largely as it did nearly sixty years ago but overall the school's buildings have increased over the last half century to accommodate increased pupil numbers and more facilities. 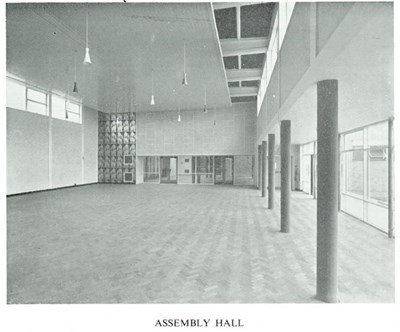 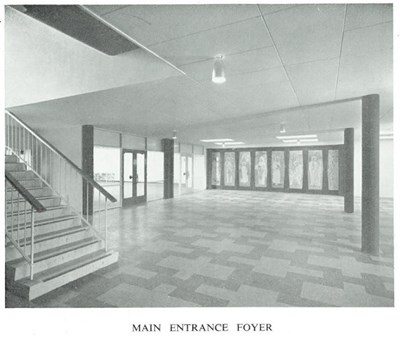 Famous in the 1960s for its rugby and football achievements, it was not called a high school until education reforms of the early 1970s introduced comprehensive schools. In the early days under the headship of Mr J.F. Grundy, the school had a single pupil styled School Captain. There were also house captains and prefects, each class elected a Class Captain in the first year who remained so for the next three years. In the then fourth and final year, the boys and girls were each placed into single sex classes. A fifth year class was introduced in 1962 but only for external pupils coming from other schools and they stayed on until age 16.

In 2004, St Cuthbert's became a Business and Enterprise College as specialist schools became central to the development of secondary education.  Linked to the school's specialism the school (supported by the European Community through the European Regional Development Fund, the Coalfields Regeneration Trust, the British Government’s Single Regeneration Budget and St.Helens Metropolitan Borough Council) operated its own hotel and café. Lindisfarne House was a hotel built onto the school by Farne Limited. It was a National and International Exchange Accommodation Centre offering accommodation for national and international schools exchanges, visiting students, amateur sports organisations and other national and international visitors and groups. In 2004, the Hotel was re-opened by the Earl and Countess of Wessex. The hotel closed in November 2014.

In 2015, after a period of consultation with pupils, parents, staff and governors the school name changed to St Cuthbert’s Catholic High School. The building previously occupied by the hotel has been redeveloped to provide seven state-of-the-art classrooms.

Three generations of “Cuthie’s Kids” have now passed through the school since the mid-1950s under the leadership of seven head teachers.

The original houses of the school were: Lourdes, Walsingham, Carmel and Fatima; each being named after a Marian shrine where Our Lady was reputed to have manifested herself to chosen children. The houses are now Dignity, Faith, Hope and Unity; each is represented by its colour and motto and focuses on an area of the world, has adopted a charity and has its own House patron.